Today, ZenRez is a comprehensive software solution designed for fitness studios to attract new clients, retain current one’s, and recover those that have fallen out of fashion with the studio. Back in 2016, ZenRez was just a fraction of what is is today. 2016 ZenRez was simply a marketplace connecting fitness goers with fitness studios that served to attract new clients with new studio’s through discounted, last-minute, class-by-class pricing. ZenRez competes most closely with ClassPass & MindBody.

When I mentioned on the home page that I was a common face in the Pittsburgh entrepreneurship scene, I was not lying. Throughout my four years at CMU, I attended countless events hosted both on campus and off, meeting like-minded individuals along the way. I originally met Matt Capizzi at an event during the fall of 2013. At this time, Matt was apart of the MBA program, though admittedly was here to just meet smart people to recruit for ZenRez. At this time, ZenRez was just an idea being pitched as, “I want to do what Kayak has done for the airline industry to the fitness industry.” Inspired by yield management classes and his personal passion for yoga, ZenRez was born to fill the empty spaces in fitness classes everyday.

By chance, I ran into Matt on campus two and a half years later during the spring semester of my senior year. I re-introduced myself, lucky that he still remembered who I was. I asked him about ZenRez and was delighted to learn he had raised a seed round and was running the company with a small team out of San Francisco. I then asked, “what do you need help with?”, to which he replied, “growing ZenRez in Pittsburgh.” And with this short conversation, the seed was sown for an exciting side project that would continue throughout the spring until I graduated in May.

What I liked most about ZenRez was that it made a ton of sense for me a user. I was just getting into yoga after a string of serious muscle injuries from my soccer career, but found it be quite pricey next to my normal runs around town (hint: they’re free). ZenRez took classes that were normally $15-$20 down to $10-$12. Additionally, they had a plethora of promotional offers that made it easy to get your first handful of classes free if you signed up some of your friends. With this in mind, I thought the most tangible place to grow ZenRez was simply in the college community, targeting users like me. 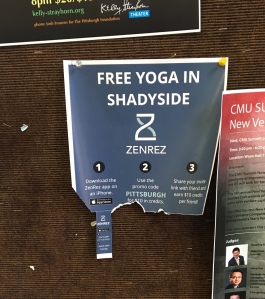 I used a combination of swag, cardboard 1″ x 1″ cards, and fliers to target three colleges in Pittsburgh that were Carnegie Mellon University, University of Pittsburgh, and Duquesne University. I used eye-catching headlines such as “Free yoga in Shadyside” to draw attention. I stopped students outside of gyms and anyone with a yoga mat to tell them about ZenRez. I even experimented with marketing through Tinder for a short period, which was mildly successful, though inefficient. I yoga mat straps & ZenRez tanks to personal connections and mutual friends in the area who were passionate about yoga to seed influencer’s outside of my network. While none of these initiatives drew massive new user sign-ups, they were pivotal in my understanding of the target ZenRez user and how to best pitch ZenRez. Both of these skills would become extremely useful as I sought larger initiatives to grow ZenRez in Pittsburgh.

Inspired by a campaign Matt ran in San Francisco, I sought cross-promotional opportunities with retail establishments often frequented by the target ZenRez user. Think fitness stores (e.g. Athleta & Lululemon), juice shops, and healthy or vegan restaurants. I was able to gather a list of potential retail establishment through a combination of online research, physically walking different neighborhoods, and asking around.

I made the most in-road with two local establishments in the Shadyside neighborhood of Pittsburgh; TrueRunner and Salud Juicery. Below you can see the short presentation I gave to the owner and management of Salud pitching a cross-promotion between them and ZenRez. The basis of the idea is ZenRez offers a discount at Salud that can only be redeemed the day of the fitness class, while Salud would handout 4″ x 8″ fliers promoting ZenRez with a $10 off promotional code.

Understanding the power of social media and content marketing, I sought to connect ZenRez with a more influential player in the Pittsburgh fitness scene. Based on another connection I had made from a Pittsburgh entrepreneurship event (if you can’t tell by now, Pittsburgh has a small entrepreneurship scene), I set up a meeting with Anthony Vennare who was a co-founder of Fittsburgh (now Fitt) and responsible for partnerships. We met for coffee in the Strip District and had a very productive conversation about a potential content marketing campaign between ZenRez and Fittsburgh.

Fittsburgh was obsessive over their brand image, always opting for more strategic, longer term partnerships instead of trying to make a dollar today. The best example of this was a multi-million dollar, multi-year deal they had struck with UPMC Health Plan to promote their health insurance to twenty something’s needing to find their own insurance.

The result of the meeting was the framework for a content marketing deal that would consist of three articles over the course of three months for the cost of $2,000. Fittsburgh would handle the content creation and distribution to be approved by ZenRez. These details were handed over to the head of marketing back in San Francisco to continue conversations.

All-in-all, I found the above work to be a tremendous learning experience and a source of some beer money as my days in Pittsburgh came to an end. While I had explored many of these ideas theoretically in classes, ZenRez provided an extremely tangible application of these ideas with a real product, real partners, and real users. To this day, I am still in contact with the ZenRez team and their transition into more of a SaaS company in addition to a pure marketplace.